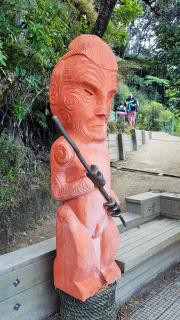 As one of the original 109 Whakarewa land owners in Motueka,  Hohaia Rangiauru is a key figure in our history and our kōrero, and perhaps more significantly is the role Hohaia played in getting our people to where we are today – back to owning our Whakarewa whenua.

Hohaia was a respected Te Atiawa chief, and was just one of three Te Atiawa rangatira present at the hui on the significant day of 29 October 1841, where the hui between Motueka rangatira and Captain Arthur Wakefield took place. Here is where they discussed land ownership and settlement of Europeans in Te Tau Ihu, and where several agreements were made of which land was not to be occupied by Europeans, specifically Te Maatu.

As history has recorded, the New Zealand Company did not honour the guarantees given to our ancestors. Instead, surveying teams were instructed by the New Zealand Company to include all our cultivations and occupied lands to be carved up into 50 acre sections, and these were then included in the pool of sections available for selection via ballot.

It was the Māori Land Court Hearings related to 1843 – 1844 where Hohaia gave evidence around these events that ensured our title to our customary land was recognised.

He also assisted with evidence around ownership of other claims to land to facilitate their return to the rightful owners. In one such case, Haneta (Annetta)of Te Ātiawa was awarded the return of 30 acres, although only 15 acres was allotted to her name. Hohaia submitted a petition to the Government on her behalf to have the remaining 15 acres against her name.

Hohaia Rangiauru has been immortalised at the entrance of Medlands Beach in the Abel Tasman National Park, holding a tokotoko. This represents his authority that he had as a chief, and with his involvement in securing the customary rights to our lands through the Land Court hearings.

We’re lucky to have information about our tūpuna to compile into stories, but what is even more pleasing, is when we have artefacts and pieces of history from them. The National Library has a copy of a letter Hohaia wrote to Wiapi on September 30, 1878, although unfortunately we have little information around the context of the letter.

For the designers – they can access higher quality images of the letter here: http://mp.natlib.govt.nz/detail/?id=1032067&recordNum=0&t=items&q=Hahaia&s=a&l=en&tc=0&numResults=20