The petitioner prays that she may not be deprived of her land at Motueka, about which she says she is in great affliction. 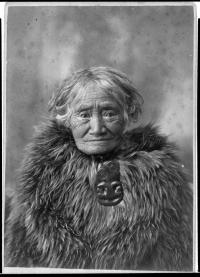 Petition No. 303, dated 26 October 1878 was the first of three petitions made to Parliament by Merenako, a high-ranking Te Atiawa o te Waka-a-Maui kuia. Merenako and her brother Te Karara came with other families of Puketapu descent on one of their hapu’s first three heke into the Motueka region in the early 1800s.

Te Atiawa o te Waka-a-Maui enjoyed a mobile coastal lifestyle, with Tasman Bay forming part of their maritime highway, and the bays and estuaries from Separation Point to Marahau providing ready access to fish and other foods, as well as fresh water and fertile land for horticulture. Prominent cliff-fronted headlands provided easily defended lookouts, and storage pits were sited on well-drained ridges.  They had occupation sites from Taupo Bay to Awaroa and all along the coast to Te Pukatea Bay.

Awaroa was the papakainga of Merenako and her whanau. She gathered harakeke there for weaving, and the bay was a favourite fishing site.

In the early 1830s Mere explored the Riuwaka Valley, starting at Puketawhai and climbing the hill to the area now known as Dehra Doon.  A large part of the valley was swampland, making her journey difficult, and leading her to give Riuwaka its original name of Turi Auraki (tired knees).

Merenako married twice. Her first husband was Taare Te Ahimanawa, a rangatira of Ngati Rarua, who landed with her at Riuwaka (Puketawhai). When he died she married Pene Te Poa, also a Ngati Rarua chief. Both had large land holdings, including in Motueka, and this was seen as the catalyst for Te Atiawa and Ngati Rarua of Motueka to settle in Motueka as one.

Both iwi retained their own identities, with Merenako and her Te Atiawa land and mana to the south and west of Te Maatu, and Pene Te Poa Karoro retaining his land and mana to the north and east of Te Maatu. With her land, Merenako is said to have invited a party of her Ngati Rahiri and Puketapu kin who had been living at Arapaoa, to join her at Motueka.  Such was her prestige that she was able to make a tuku of land in her own right.  She is also said to have given land to Pukekohatu at Te Maatu, a much disputed area.

Merenako cared deeply for her land and her people and went to great lengths to protect them. She is remembered for having saved the lives of the children of Hone Tupou after his capture at Moutere at the time of the Te Rauparaha raids. Tupou did not want his tamariki to be made slaves, so he gave a pounamu patu to Ngati Rarua so that his children could be killed by a rakau rangitira.  But Merenako intervened and saved the children by adopting them as her own.  One of Tupou’s daughters later married into Te Atiawa.

Merenako’s final petition to Parliament in November 1887 concerned a piece of land at Motueka belonging to her that had been wrongly sold. She asked that her son be placed in possession of it.  The Committee responded “that steps should be taken by the Government to put the petitioner in possession of her property with the least possible delay”.

As a notable kuia, Merenako upheld her Te Atiawa rangatiratanga throughout her long life, and is still remembered today as a tuarangi o Te Atiawa.  She outlived both her husbands and her son, and in later life she lived with Pare, her niece, also known as Merenako, and Huta Pamariki Park. Merenako was thought to be well over 100 when she died at their homestead in 1888.

Warren Stephens of Motueka recalled that “… she had appeared to be in perfect health and had travelled to Riuwaka to farewell her Pakeha friends. Then, after calling her Maori people together, she had appealed to them to ‘be kind to each other’ and had laid down and died.  This had a deep impression on Mr Stephens, who was only about five years old at the time. He supposed it was a matter of willpower and faith.”  Another source says that “her death was announced by the firing of guns, that many Europeans attended the funeral service in the Maori chapel, and … after this, a long procession moved from the chapel to the tomb of the deceased’s husband, Chief Pene.  Fresh vernal withes of Babylonian willow were used for the badges of mourning’.”

Merenako’s magnificent translucent pounamu hei tiki (seen in the photograph) was for many years stored in a vault in the Bank of New Zealand in Nelson on behalf of the Cawthron Institute, unidentified. It was known to be very special, but its origins were unknown. Photographer Graeme Robertson who began working at the Cawthron in 1988 set about trying to trace the whakapapa of this taonga. After much searching over many years it was matched with the hei tiki in the photograph of Merenako in her old age (above).

As Robertson noted, writing about the experience, “There is a strong belief that such taonga will always find their true home.” And eventually it began its journey. In 2009 at a ceremony at the Nelson Provincial Museum, in the presence of local iwi and many descendants of Merenako, a formal agreement was signed between all parties involved, placing this beautiful taonga into the care of the museum, with rules about who may access it and when.  As Robertson noted, it may be a temporary stop, but it is there today. It sits with the photograph of Merenako in the Taha Maori area in the downstairs permanent exhibition area in Te Atiawa’s glass cabinet, where it is available for all whanau, whanui to visit. The kiwi korowai Merenako is wearing in the photograph is one of two still held in safe-keeping by the Park families.