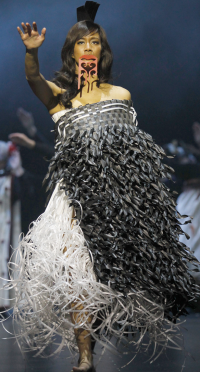 The work of Ngati Rarua descendant Olivia Hall was showcased on the world stage this month at a glittering Louis Vuitton America’s Cup event in San Francisco. The event, held at the city’s Museum of Fine Arts, was attended by 700 invited guests, including Louis Vuitton designers and representatives of Vogue, Elle, GQ, the Daily Telegraph and other top international magazines and newspapers.

The dress, titled Manu Uha (the essence and prestige of wahine), was one of six World of Wearable Arts prize winners chosen to reflect the spirit of the America’s Cup contest and to represent each of the countries competing this year. Manu Uha, portraying a stylised, contemporary view of traditional Maori dress, was chosen to represent New Zealand’s team, Emirates Team New Zealand.

“At the time I wanted to design something that reflected the strength and beauty of our Maori women ancestors, and that accurately reflects traditional Maori values, but to make it from unorthodox materials.  Having grown up on an orchard I’d had a lot to do with the packing materials we used for fruit, and so I decided to create my design out of package strapping.”

Olivia spent many evenings weaving the dress from strands of black and white package strapping, using various curling techniques to highlight and alternate the textures of the materials.  Along with a lot of natural creativity and artistic talent, Olivia was able to bring to the project the skills she’d learned some years ago as a student at Toihoukura, a Maori arts and design school.

Olivia lives in Nelson with her husband and their four sons. She is a former NRAIT Trustee.