The historic Kaiteriteri hui of 1841

Kaiteriteri was the scene of a highly significant hui in October 1841 between the rangatira ki Motueka and Captain Arthur Wakefield.  Here we trace the involvement of Te Rauparaha in the backdrop to that meeting, and the events and multiple misunderstandings that led to the alienation of our whenua.

On 16 October 1839, the New Zealand Company’s Colonel William Wakefield arrived at Kapiti aboard the Tory. His most pressing  mission was to purchase land for settlement, and he had been led to believe that Te Rauparaha and Ngati Toa owned large amounts of land in areas now known as Wellington, Auckland, Taranaki, Hawkes Bay, Nelson and Marlborough.

On arrival he met with Te Rauparaha: “Friend,” said Wakefield, “to whom does Taitapu [Te Tai Tapu/Westhaven] belong?”  Te Rauparaha replied: “It belongs to me.” Assuming this to be true, Wakefield offered “…pipes, tobacco, knives … [and other items],” In payment for the land.  Te Rauparaha argued the payment was insufficient for Te Tai Tapu and pushed for more, but that was Wakefield’s final offer.

It later emerged that Te Rauparaha was under the impression he was selling only Te Tai Tapu, and that if he signed the deed, his name would be shown to the Queen of England and he would be known as the Great Chief of New Zealand.  And so he signed the Kapiti Deed. Wakefield on the other hand, did not know Te Rauparaha did not have ownership or the right to sell the lands, and furthermore believed that through this deed the New Zealand Company had acquired all the lands he thought were under Ngati Toa possession, including large parts of Nelson and Marlborough.

Confusion around the deal was clearly compounded by poor translation of the discussion, a point made by Te Rauparaha to Commissioner William Spain in an 1843 land claim enquiry.

On 2 May 1841 the Company’s second expedition set off in the Whitby, Will Watch and Arrow to establish their second New Zealand settlement in a place they planned to call Nelson. The fleet, captained by William’s brother Arthur Wakefield, arrived in Port Nicholson late in August 1841. William wanted the fleet to head south to establish a settlement in Port Cooper (Lyttelton), but Governor Hobson wanted them to head to Auckland.

After three weeks of debate, William took matters into his own hands. He boarded his brother’s ship, and told him: “You cannot go to Port Cooper, the Governor won’t sanction it … but I’ll give you a pilot and an interpreter and you can take the ships and see the Chief Te Rauparaha at Kapiti. I have heard there is some good land about Blind Bay (Tasman Bay).”

A successful korero with Te Rauparaha confirmed in Arthur Wakefield’s mind that land in Blind Bay was available for settlement, even though Hobson had warned him that local Maori already held title for these lands, not Te Rauparaha. Wakefield’s fleet entered Tasman Bay and anchored at Astrolabe Roadstead on 9 October 1841. Survey parties were sent out daily from Astrolabe Roadstead and, having established a base at Kaiteriteri, they decided this should be the site of Nelson. 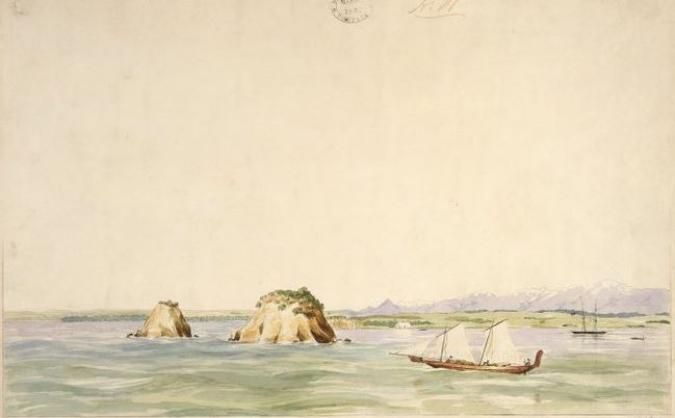 Wakefield’s initial contact with Maori in the area was with Ngati Rarua and Te Atiawa chiefs. His diary records: “We went to a cove called Kayatiritiri about 5 miles South of the anchorage, we landed and walked across a hill to the beach of the river Motuwake … the village consists of about a dozen huts.”

Arthur Wakefield knew local Maori held title to this land, but the Kapiti Deed and his meeting with Te Rauparaha had given him confidence that the NZ Company had formally secured it.  His plan therefore was to make gifts to the local chiefs which they might view as payments for land, although in their eyes they were still to secure payments. No deeds or records of boundaries were established. To make ‘payments’ and draw up deeds and boundaries would be to admit that the Kapiti Deed was insufficient.

Te Iti asked to see what payment had been made to Te Rauparaha. Wakefield replied: “I will give you blankets, if you will receive them as a present”, and included a dozen double-barrelled guns and gun powder. Te Iti then consented for the Europeans to settle but not to take all the land.  Our tupuna made it particularly clear that Te Maatu was not included, that it was important to our communities’ providence and was not to be alienated.

Te Iti also made a point of showing Wakefield which land he would give them, and showed him from Kaiteriteri outwards to the ocean. But Te Iti had not understood the ‘deal’, which was that Maori would be left with only one part reserved for them.

Had Commissioner Spain completed his 1843 investigation, he would have found that Te Rauparaha did not have the power to sell the land, and that the local Maori who were alienated from the Te Tai Tapu land hadn’t signed, seen or known of the content of the Kapiti Deed, or received any payment for their land, only ‘gifts’.